Stop Acting Like A Kid – Akon Blasts M.I For Calling Him Out About Wizkid

Popular America based Sengalese singer, Akon has replied Nigerian rapper, M.I on his decision to query him for calling Wizkid his little brother.

Recall that Akon called the Nigerian pop star his little brother after their performance at a concert in Ghana.

This didn’t sit well the Nigerian rapper who told Akon to calm down. This statement led the rapper to be criticized heavily on social media.

Reacting to the statement, Akon has advised M.I to stop acting like a kid. 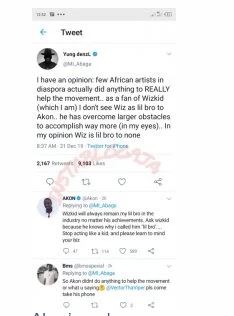 Happy New Year To All 420loaded Fans! May This Year 2020 Be An Amazing Year For You All

E!News: Akon announces finalization of the agreement for Akon City in Senegal